John McCain is back on the attack following his Palin-induced shot in the arm, and he’s attacking on…taxes?  Senator, Fannie Mae and Freddie Mac are just sitting there waiting for you.  The NRCC has even got the ball rolling for you.  Your first ad following the debate was a cringeworthy mishmash.  The tax-cutting pitch is all well and good, but take a wild guess as to what’s on people’s minds now?  Hint: it ain’t tax cuts, emphasized in this ultimately wasted ad:

As an aside, James Pethoukokis of U.S. News doesn’t think McCain is going to pick up that ball (and believes ACORN is going to get a pass in the bargain):

2) There is a racial component to criticism of the Community Reinvestment Act that can make it sound like you are scapegoating minorities for Wall Street’s problems.

3) The campaign believes McCain’s time is better spent talking about taxes and energy and healthcare. Really.

1) It’s not that complicated. McCain called for stronger oversight of Fannie and Freddie in 2005, but Senate Democrats (including Obama) blocked reform. Between 2005 and 2007, Fannie and Freddie bought up a trillion dollars worth of subprime mortgages. Some they kept, some they packaged and sold to Wall Street.

Thus Fannie and Freddie enabled and spread the contagion that melted our financial system, while the Democrats enabled Fannie and Freddie over John McCain’s objections. Conservatives cannot afford to lose the argument over what caused this crisis. One would think McCain would feel that pressure more acutely than most.

2) Fine. Steer clear of the CRA and focus on Fannie and Freddie.

3) Can we not walk and chew gum at the same time?

Dunno about you, Sen. McCain, but I’m with Spruiell (as is Miz Michelle, I hear, though Ed appears pleased with the ad).  Sure, go ahead and slam Barack Obama as a tax-hiker (gawd knows he’s an easy target on that score), but there’s a lot of anger out there about the runup to the bailout just looking for its rightful target, and you’ve got history and a whole lot of C-SPAN footage on your side.

The crap sandwich has gone down the hatch.  After Senate approval, the House bought the bailout bill 263-171. Unsurprisingly, my congressman voted to open wide.  President Bush reportedly has just signed the bill.

UPDATE: Wall Street celebrates with a selloff.  Dow falls 157 points.  Well, that wasn’t supposed to happen, was it?

UPDATE II: Instapundit links to a summary video from the NRCC, who must be clawing at this vote like a lifeline from heaven (I’m relieved to see somebody with election-related clout has woken up and decided to run with this…John McCain, call your office):

Actually, I’m fairly impressed with how Rep. Artur Davis (D-AL) appears to have come clean (and fairly glad that the NRCC gave him credit for it, even if only to show the contrast to his colleagues).

UPDATE III:  Allahpundit’s got ahold of the ad, and his thirst for blood is rising.

Man, Captain Ed is on fire today.  He’s beaten me to the punch in revisiting one of Biden’s statements from last night which I touched on in my liveblog; namely, that he claims “credit” for introducing ideology as a deciding criterion for confirming judges to the federal bench.

The question from Gwen Ifill went as follows:

…Can you think of a single issue, policy issue, in which you were forced to change a long-held view in order to accommodate changed circumstances?

When I got to the United States Senate and went on the Judiciary Committee as a young lawyer, I was of the view and had been trained in the view that the only thing that mattered was whether or not a nominee appointed, suggested by the president had a judicial temperament, had not committed a crime of moral turpitude, and was — had been a good student.

That’s why I led the fight against Judge Bork. Had he been on the court, I suspect there would be a lot of changes that I don’t like and the American people wouldn’t like, including everything from Roe v. Wade to issues relating to civil rights and civil liberties.

First of all, Biden cleverly shifted the focus of the question.  He wasn’t “forced to change” his criteria for a qualified federal judge “in order to accomodate changed circumstances.”  He decided on his own to use his position on the Judiciary Committee to impose those criteria on the rest of the Senate, for purely ideological reasons (i.e. to head off “a lot of changes I don’t like”).  President Reagan was famous for railing against what he called the “imperial judiciary;” Senator Biden is to be congratulated, in a sense, for introducing the imperial Judiciary Committee.

More important, however, is what I alluded to during the liveblog:  specifically, that politicizing the federal bench, especially the Supreme Court, to the degree that Biden confesses to have done is more something for which he might be run out of town on a rail than something to brag about.

Barack Obama, the self-described post-partisan candidate, has chosen one of the most nakedly and appallingly proudly partisan politicians in Washington as his running mate.  That’d make a great ad to rally the GOP base, which is still sensitive to Democratic skullduggery on court appointments, for much of which Biden has just pronounced himself responsible.  Or at least it’d be less lame an ad than one complaining about Biden’s sighing.

Joe Biden — lawyer, senator, constitutional scholar, Judiciary Committee chairman, vice presidential candidate — flubbed the question he should know more about than anything else:  the job description of Vice President.

After Gwen Ifill’s question about the VP’s role (which she gift-wrapped to Sen. Biden with a gilt-edged invitation to trash Dick Cheney, and Biden did not disappoint her), he replied:

Vice President Cheney has been the most dangerous vice president we’ve had probably in American history. The idea he doesn’t realize that Article I of the Constitution defines the role of the vice president of the United States, that’s the Executive Branch. He works in the Executive Branch. He should understand that. Everyone should understand that.

Where does one start?

Shannen Coffin at NRO posts a brief and excellent historical discourse on this major gaffe by Biden.  Coffin points out that for the first 150 or so years of American history, the VP’s role was primarily legislative, having virtually no executive authority at all:

The Executive Role of the Vice President, which is not delineated in Article II, has only developed in recent decades. Indeed, Vice President [Lyndon] Johnson was so concerned about certain delegations of Executive authority to him by President Kennedy that he asked the Justice Department whether he could constitutionally accept that delegation, given his concern that it would be inconsistent with his role as President of the Senate.

Read the whole thing.  Power Line, Captain Ed, and Instapundit have more (plus a paper by Prof. Reynolds on Dick Cheney’s vice presidential role and the constitutional legitimacy thereof).

So given that tradition, executive precedent, and black-letter constitutional law give the Vice President footholds in two branches of government, I’d say VP Cheney has a better handle on the job than Sen. Biden, who might make use of a pocket Constitution for the occasional self-administered pop quiz.  At least before a debate.

The McCain campaign has released its first post-debate ad, and it’s surprisingly weak.  With all the inaccuracies coming from Biden last night, some of the ones the McCain camp chose to highlight were not impressive:

OK, the one on Ahmadinejad I can see why they used, but why not his misrepresentation of McCain’s record on Fannie Mae and Freddie Mac?  People care a lot more about the financial meltdown than clean coal.  Same thing with the phantom health insurance tax that nobody ever proposed.  And that has got to be the worst ending to an ad I’ve ever seen.  “Sighing?”  What was the relevance of the Palin clip on Israel?  And why talk about exaggerating when what Biden is saying is out-and-out wrong, not out of proportion?

I’ll leave aside the question of why you’d talk about exaggerating when you can’t even spell “exaggerate” correctly in the first place.

Captain Ed agrees that the ad falls apart in the end.

Man…and they had so much to work with.  Weak ad.  Very weak ad.

UPDATE: Aaaaah, I see, Captain Ed points out why they included the Israel clip.  Apparently that’s where the alleged “sigh” came in.  Frankly, I thought it was part of the soundtrack, but if that’s a sigh, then they’re really reaching.  But in fairness, I’ll update my assessment:  the ad is even weaker than I thought.

My birdblog’s back, and it’s better than ever!  (Hey laaaa, hey laaaa…!)  Story behind the photo below the break. 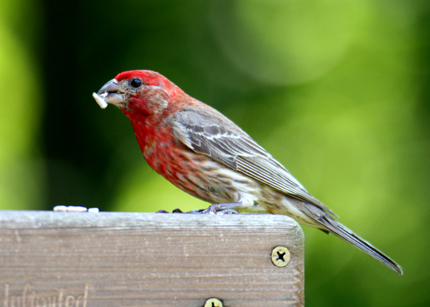