OK, time for a little birdblogging.  Get the story behind the photo below the break. 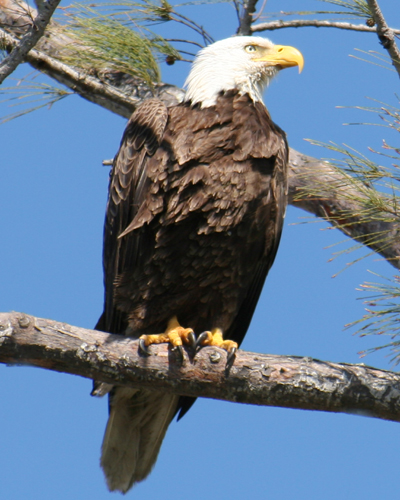 END_OF_DOCUMENT_TOKEN_TO_BE_REPLACED

According to the man who first identified the Bush Doctrine, it appears that despite the impression you may have have drawn from ABC’s Charlie Gibson interview with Sarah Palin, apparently the Governor is more in touch with the definition of the term than Gibson is.  Moreover, her request that Gibson make his question about the Bush Doctrine more specific was entirely apt, in that the Bush Doctrine has gone through no fewer than four incarnations.

For those who didn’t see it, Gibson first refused to specify what he meant by the Bush Doctrine, then when Palin began to answer, Gibson “corrected” her and identified the Bush Doctrine as an asserted right to pre-emptive military self-defense.  The above article skewers that definition as woefully outdated and insufficient.

UPDATE: Wow, I’m just dizzy.  Michelle Malkin cribbed my title.  And after only two or three days live.  (She could at least have thrown me a trackback.)

UPDATE II: Apologies to Ms. Malkin.  My stats have alerted me to a trackback listing on MichelleMalkin.com.  (I still came up with the title first, tho’. :::snicker!:::)

Until now, that is, inexplicably enough.  Fresh from Gallup in Princeton:

The generic Congressional ballot, in which the Democrats held an 11-point advantage (51-40) just a month ago and a 15-point advantage (55-40) in February, has collapsed since the conventions to a statistically insignificant 3-point Democratic advantage (48-45) today.

END_OF_DOCUMENT_TOKEN_TO_BE_REPLACED

Must be the new “family values” I’ve heard tell about.  Well, I imagine if she were into that kind of thing, she likely would be a pretty sought-after dinner-party guest, now, wouldn’t she?

The first example is the detail from my current banner art.  Pictured in the header are two roseate spoonbills I caught chatting on a sandbar during feeding hours at the J.N. “Ding” Darling National Wildlife Refuge.

END_OF_DOCUMENT_TOKEN_TO_BE_REPLACED

…the resultant hectoring, mendacious little ball of hysteria would be hired by ABC News.

Or already has been.

Charlie Gibson’s much-awaited prime-time network interview with Governor Sarah Palin aired last night on ABC News.  The normally likeable and professional anchor was nowhere to be found.  In his place someone had substituted a bizarre changeling:  one who combined the annoying habit (popularized by FNC’s Bill O’Reilly) of stepping abruptly on the interviewee’s answers with the disturbing practice (for which the NYT’s Maureen Dowd has become notorious) of completely changing the meaning of a quote by way of selective editing and strategic ellipses.

END_OF_DOCUMENT_TOKEN_TO_BE_REPLACED

OK, important milestone in the evolution of WitSnapper!  I’m initiating my first recurring blog feature: the Blogger Neologism Watch. The BNW will kick in whenever I see (or my attention is directed to) an instance of a blogger coining a kewl new term of his or her own invention.  Candidates will be judged on originality, catchiness, insight, and possible or proven staying power.

Today amid my blogsurfing, I spotted a fantabulous new buzzword referring to Governor Sarah Palin (R-AK), and in retrospect the source surprises me not one whit.

END_OF_DOCUMENT_TOKEN_TO_BE_REPLACED

I’m thrilled to be bringing you (according to existing stats) the approximately 4.1 millionth blog under WordPress’s aegis.  What a relief, too…if I’d waited any longer I might not have beaten the glut.